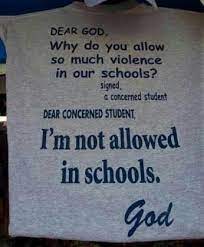 By faith we understand that the universe was created by the word of God, so that what is seen was not made out of things that are visible. - Hebrews 11:3 (ESV)

I think we sometimes forget to stop and truly take in what God is saying to us through His word. Have we truly considered the key verse today, which I am sure we have all heard from time to time. By faith, we understand that the entire universe was created merely by God speaking! The word "universe" broken down means single (uni) spoken sentence (verse)! The events of this world, which we trump up to be so dire and cataclysmic are but a blink of an eye to the being that can create an entire universe by speaking. That is why I always find it hilarious when the Christo-political forces insist that every upcoming election is the "most important of our lifetime" and that somehow God needs our help to make sure the "right" evil people are elected. Like the God that created the entire universe could not handle a Barack Obama presidency, or Donald Trump. As if God will not use any and all elected officials for His glory and His ends. As if God "wakes up" after Election Day and is surprised somehow by any result. As if we can do anything to upset His plans and His grand scheme. The staggering arrogance of man never ceases to amaze me.

We must understand however that there are church forces that live on selling the victimization of the church. This is what happens when you compromise the holy with the profane. Politics sells victimization because it gins up outrage and increases voter turnout. The NAR dominionist faction of the church spends their days figuring out how they can make Christians feel marginalized, persecuted, and overall victimized by the evil leftists, Democratic, godless heathens. To make the church feel as if they somehow do not serve the God that created the entire universe by speaking. To make them feel as if that God somehow needs them more than they should need Him. Along these lines, the NAR always rolls out familiar talking points so the victimized church can feel secure in what they want to blame to make themselves feel less responsible and a just a little better. Until the next great outrage of course. You see the cycle never ends because the powers that be need the church in a constant state of victimhood so they can be easily leveraged for each election.

One such common talking point they abuse is one that is a pet peeve of mine because it just makes us seem so petty and our God so small. Say it with me and feel liberated:

No one kicked God out of our schools.

Just think how absurd the notion would be that any man or school board can dictate to the being that spoke the universe into existence! What is our God now hanging outside the fences of schools lamenting that He cannot go inside? What kind of God do you think you serve! Well, they changed the locks, I guess that's it. I have watched as the shills for the gun lobby, including many who claim to be "Christian" leaders talk about every issue as the problem except for the guns that are used to kill all of these people. The easy fallback argument for the church leaders is this asinine notion that God has been kicked out of our schools since 1962. Can you imagine what our schools might look like if God was not in them for 60 years! Please stop the stupidity.

So, what happened in 1962? That was when the Supreme Court said that a public school could not force children to pray in the school. Not that they could not pray on their own, or even in their own groups. Just that the school could not force a stop in the activities to demand all people regardless of faith, pray. Is this a good or a bad thing beloved? It is a good thing of course! Only a dominionist trying to establish a theocracy would disagree. God did not order us to force people who do not know Him or believe in Him to pray to Him. From a secular standpoint we should also be thankful for this decision. One day it may not be Christianity in the lead. This decision would stop ANY religion from forcing their prayers upon people who do not share their faith. What this is not however, is "kicking God out of our schools." Can you just imagine for a second how entitled and whiny we must sound to unbelievers? The forced regurgitation of prayers you do not mean and probably do not understand is not some secret lynchpin for a moral society. The Great Commission was not meant to be the Crusades.

So, we should ask ourselves routinely what kind of God we serve if only to remind us. I do not serve a god that needs man's permission to enter a school building. I do not serve a god that is afraid of an election turnout. Psychotic political pastors such as Mario Murillo and Greg Locke actually think that Jesus is going to review your voting record before deciding your eternal fate. How absurdly pathetic. I do not serve a god who is tied up with the carnal politics of man. The kingdom of my God is not of this world. I serve a God who tells me I am but a pilgrim and sojourner through these lands because my citizenship is in heaven and no, He does not allow dual citizenship. I serve a God that is no respecter of person, let alone political party. My God does not make me try and guess the lesser evil - He says avoid all of them! Oh beloved, thank God we serve the one true God who created everything in existence by a single spoken sentence! Keep your puny gods that have no power. Keep your false gods that are constrained by school boards, Senators or Supreme Court Justices! Keep your weak, victimized god and his weak victimized false religion. My God is the beginning and the end and everything in between! Kicked out of the school system? Not my God! The only reason why these school shootings have not been more horrific is because God is expressly everywhere through His omnipresence. Stop embarrassing yourself and our God by telling people He cannot do something within His own creation! We are the created and He is the Creator! People ask me occasionally if I really am afraid that God will strike me down with a bolt of lightning and my answer is always the same - I am afraid of forgetting that He can if He so wishes! We have lost the fear of God and the imposter church has replaced Him with the paltry weak gods of this world, who need man's help to achieve His purposes. Back slowly away from the political altar you have been bowing down to and come back to the only true God who thankfully does not need our help for anything.