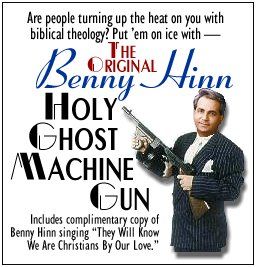 Benny Hinn once said he wished he had a holy ghost machine gun to blow the heads off his enemies. Creflo Dollar once fantasized from the pulpit about lining up the non-tithers in his church and mowing them down with a machine gun. Hinn once quipped that money always follows righteousness so hurry up and give to him! Creflo once shamelessly asked his congregants to pay for a new luxury private jet because the one he had was getting old. Both Hinn and Dollar have been in the news over the past couple of years because of allegedly "repenting" of their previous teachings on tithing. It is curious though because both were notorious for being abusive tithing teachers. One could argue that tithing and seed theology was the center of both ministries. Sure, Hinn also had the silly knocking people back with his suit coat shtick and Dollar has had his obsession with Joseph Prince's greasy grace expand over the years but both are mostly known for fleecing their flocks.

Fleecing is an understatement as Creflo Dollar is alleged to be worth over 27 million dollars while Benny Hinn has prospered to the tune of 60 million dollars. So, combined they have had 87 million reasons to keep pushing the money grift, so why the sudden change of heart? This is where things can get a little more convoluted. Both have eclipsed the 60-year mark so perhaps their own finality has them worrying a bit. This was explained by Hinn:

It is sad that Benny may not realize how much trouble he is actually in. Rebuked? I am afraid he has more than that waiting for him. It is easy to say the gospel, miracles and blessings are not for sale, but he has sold them for decades. He has sold them knowing full well he was lying. He has sold them to the tune of 60 million dollars. I might add that television programs from Benny Hinn following this alleged repentance still showed the bent towards asking for money in return for blessing, which is the heart of his heresy.

Dollar is different but not in a much better position at all. His conflict arose from embracing a heresy known as antinomianism, or greasy grace. This heresy is no better or worse than being an abusive tithing teacher, but they do not coexist well at all. That is because hyper-grace demands Christians ignore the Old Testament law altogether and tithing is part of that law. While Creflo deserves credit for being intellectually honest here, this still does not smell like true repentance. Perhaps because he has publicly refused to apologize for his heretical past and still is pushing seed theology. He just stopped calling it tithing. Sorry Creflo but that does not cut it at all.

Now, when we turn to scripture for guidance only one story comes close to the tale of someone very rich from ill gains coming to repentance and that is the story of Zacchaeus in Luke 19 and the key verses today. Zacchaeus was not a prosperity preacher but he was a chief tax collector. These were infamous traitors to their own Jewish people because of their propensity for fleecing them of extra monies that they then pocketed. Ring a bell? The text goes out of its way to say that Zacchaeus was rich and there is little question that his vast wealth came from his tax collecting and price gouging. The text says he went to see who Jesus was and Jesus showed him indeed. Face with the goodness of God and holiness of Christ, Zacchaeus repented. He did so not only in word but in deed. He immediately declares that half of his wealth would be given to the poor. Not just money but half of his goods too! So, imagine if he had owned two private jets, one of them would be given to charity. Even though this was a significant gesture Zacchaeus realized it was not enough because it did nothing for the many people he robbed over the years as a Tax Collector. So, he also agrees to restore anyone he defrauded four times their loss! Think about that for a minute. He will still be well off but he stands to lose at least 75% of what he owns if we were to guess. Now with integrity and restoration as his driver, the cost does not matter. So, Zacchaeus is a great story about how even the most despised is not beyond redemption but also that repentance costs something from us personally. In turning from our sin, we see our sin and what it has done to others and we should seek to restore anyone we have damaged or done wrong by. It goes without saying that Zacchaeus never went back to Tax Collecting after this.

Therein lies the trouble with the cases of Benny Hinn and Creflo Dollar. Neither one has renounced the behavior that they claim to be repenting of. Both are still actively preaching. Both are still preaching falsely. Both are still fleecing God's flock. Neither have addressed the obvious issue of all of their accumulated wealth, essentially stolen from the flock of God for a handful of lies. Dollar goes as far as to admit that all of his tithing teaching was false and in the same breath refuses to apologize for it. Can you imagine if Benny Hinn gave 30 million dollars to a reputable charity, restored people he robbed and gave up the phony suit jacket healing schtick? Or if Creflo Dollar gave back 14 million, restored the people who bought his teachings and renounced the greasy grace gospel? Then maybe we would be talking about salvation having come to their houses.

Instead we have two hucksters claiming to realize that their huckstering was completely wrong and false. They offer no restoration for their deeds or apologies. They still fly on private jets and talk about seed theology. Their core theology remains rancid and intact. They claimed to have changed but offer no proof of any actual change. I would say mark and avoid but we should have done that quite a long time ago.