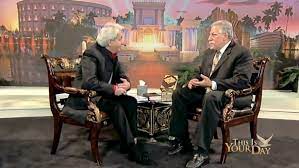 And he gave the apostles, the prophets, the evangelists, the shepherds and teachers, to equip the saints for the work of ministry, for building up the body of Christ, until we all attain to the unity of the faith and of the knowledge of the Son of God, to mature manhood, to the measure of the stature of the fullness of Christ, so that we may no longer be children, tossed to and fro by the waves and carried about by every wind of doctrine, by human cunning, by craftiness in deceitful schemes. - Ephesians 4: 11-14 (ESV)

There is perhaps no modern-day teaching more insidious and misunderstood than the New Apostolic Reformation (NAR). The founding thoughts on the NAR can be traced back to the late 1990's and C. Peter Wagner. It seems that Wagner fancied himself and his false teaching friends to be "apostles." So, he created out of whole cloth this nonsense that God was putting the band back together by reinstituting the apostles and wouldn't ya know it - it was them! Gotta love when your theology is so personally rewarding. In his writings over the years on the NAR there were two major themes with the first being this new apostolic order. The second was an over fascination with the carnal politics of this world, also known as dominionism. One of Wagner's books was actually entitled, "Dominion!" In it we find the early butchering of the verse about God's kingdom coming to earth as in heaven, which Bethel and Bill Johnson still teach to this day. Wagner taught that the church must be actively involved in transforming society on earth and many of the early NAR forerunners believed that Christ could not actually come back until the church dominated society by conquering the seven cultural mountains.

Wagner would pass away in 2016 but lived long enough to see a multitude of false teachers run away with his early thoughts and thus the NAR has morphed a bit over the decades. It is not a formal organization with bylaws and conferences as much as it is a collection of false teachings that many churches espouse. The underpinnings actually continue to lead people astray to this very day. Despite the changes, the two dominant false teachings that still make up modern day NAR is a false apostolic authority paradigm and a rabid dominionism. When someone considers a church to be a NAR church it may just mean they ascribe to dominionist teachings, the apostolic paradigm, or perhaps both. Unfortunately, the term NAR has been used as a catchall and that has led people with ulterior motives to be able to try and marginalize the importance and threat. One such person is Dr. Michael Brown. Now do I believe that Brown is NAR? Absolutely because he is a clear dominionist as much as he pretends he is not. Brown is also a NAR gatekeeper in that he protects some of the most egregious NAR false teachers, such as Bill Johnson. The above linked article is Brown's latest attempt to sound reasonable while dismissing the NAR. Let us reason together once more beloved.

"This past Saturday, Aug. 13, I had the pleasure of spending four hours in face-to-face dialogue with Doug Geivett and Holly Pivec, best known for their jointly authored books A New Apostolic Reformation? A Biblical Response to a Worldwide Movement and God's Super-Apostles: Encountering the Worldwide Prophets and Apostles Movement. Our purpose was not to debate but rather to have a constructive discussion about what they would classify as "NAR." Where did we agree and where did we differ? (For the rest of the article, I'll drop the quotation marks around NAR so as not to be redundant. But whenever I say NAR, I mean, "What Geivett and Pivec describe as NAR.")" - Dr. Michael Brown

Just to state the obvious, Geivett and Pivec do not speak for the entire church. Note however that Brown's language and posture is one of aggressiveness. He does not believe the NAR exists or only does in the minds of critics of his friends.

"In my view, they have painted with too broad a brush, wrongly grouping together related but different movements, churches and individuals, labeling all of them NAR while using extreme examples to negatively color the whole. In their view, they have been careful, judicious and fair in their citations, using the very language that NAR proponents would use and rightly describing a global movement that does, in fact, have a number of key unifying factors. In my view, having worked on some level with a number of the leaders they critique, Geivett and Pivec are putting the worst construction on the words and ministry philosophies of these leaders. In Geivett's and Pivec's view, they are quoting these leaders accurately and in context, and they can point to many examples of people who have been hurt by NAR leaders and churches. Having said this, I believe in Geivett and Pivec's sincerity. I believe they want to be fair. I believe they truly desire to dialogue with those they are critiquing. And, most importantly, I agree with many of their critiques." - Dr. Michael Brown