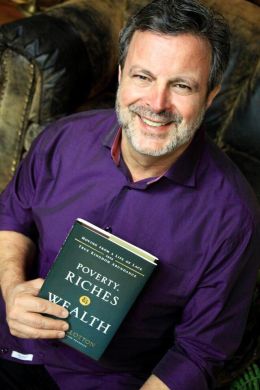 But false prophets also arose among the people, just as there will be false teachers among you, who will secretly bring in destructive heresies, even denying the Master who bought them, bringing upon themselves swift destruction. And many will follow their sensuality, and because of them the way of truth will be blasphemed. And in their greed they will exploit you with false words. Their condemnation from long ago is not idle, and their destruction is not asleep. -- 2Peter 2:1-3 (ESV)

When reviewing work by false teachers it is often difficult because of the polish that they bring to their written game. Sermons are prepared and vetted. Articles go through revisions and edits. That is why it is important to monitor social media, where truth sometimes wins out over forethought. People are human and they react as humans. It is within these reactions that we see the cracks in the veneer they put up. In those moments we can sometimes catch a glimpse into the inner working of the depraved mind. Often in the running for most depraved is Kris Vallotton, the number two guy at the cesspool known as Bethel Church, pastored by Bill Johnson. Kris is an unapologetic prosperity preacher, writing entire books on concepts derived from his black heart such as a "poverty mindset." He is a staunch false signs and lying wonders preacher as well and a regular teacher at the heretical school of supernatural ministry at Bethel. In the many reviews I have done on Vallotton I am stunned at the depth of his lack of biblical knowledge and pure abuse of scripture. I say this as the backdrop to a Facebook post from Kris today after someone clearly got under his skin. It appears that Kris quoted renowned heretic TD Jakes and some folks took issue with it, as they should. Well, it seems that Kris done lost his mind over the critique so let us reason through the very next post he made and see if we can catch that glimpse we were talking about. Bring a flashlight beloved; it's dark in there.

"I do my very best to try and bring different perspectives to the people who follow me on my page. I believe that when we listen to one another with honor we find a place of wisdom. I have worked hard for many years to break the spirit of religion off of the minds of people and allow them to actually think. I love to inspire people to think for themselves." -- Kris Vallotton

You see Kris, the problem is that you pretend to be a pastor and bible teacher. It is the job of a pastor or bible teacher to bring the perspective of GOD, not "different perspectives." It is telling though that an alleged man of God would find wisdom at the place where we listen to other people with honor. That sure isn't biblical either. Wisdom is when we listen to God instead of other people. Not everyone deserves honor Kris. That is the point. TD Jakes deserves no honor among bible teaching, God-fearing men. Like you, he deserves nothing but our contempt and the working end of the shepherd's rod. The "spirit of religion" is another false teaching of yours. You use it whenever someone wants to get biblical. What you inspire Kris is for people to think outside of what God has already said and that is why you're are a false teacher from the pits of hell.

"But for whatever reason people wanna start a fight on my Facebook page with everyone. They find fault with anyone I quote, any position I bring up, or any subject I talk about. Personally I'm really sick of it! If you want to start a fight, do it on your own page. If you don't like the people that I quote or the positions that I take, don't follow me! I don't really understand why people even waste their time arguing with each other on social media. Do you really think you are changing anyone's mind? Are you really ridding the world of false teachers? I mean, how is that working out for you?" -- Kris Vallotton

Actually it is working out just fine Kris. Thanks for asking. You just have it slightly wrong as usual. Discernment does not seek to change the hearts of false teachers because the bible says their destruction is already set. No, the object is not ridding the world of you but rather saving people who listen to you. Does it happen often? Not as often as I would like because you are good at what you do but those singular emails I receive are worth it. When someone comes out from the darkness you or another false teacher has held them in and into the glorious light of the Gospel of Jesus Christ? Yeah, it is working out just fine. So the point is not to argue. It is just to hold the bible up to what you say and allow the Holy Spirit to draw people asway from you while there is still time.

"It's okay to disagree with people without branding them with some terrible name. Just because I disagree with someone doesn't mean I don't love them. There is a ton of pressure being applied to society to make people conform to their way of thinking. I am a free thinker, I refuse to be frightened into thinking like the crowd. My loyalty isn't to a political party, it's 100% to the King and His kingdom." -- Kris Vallotton