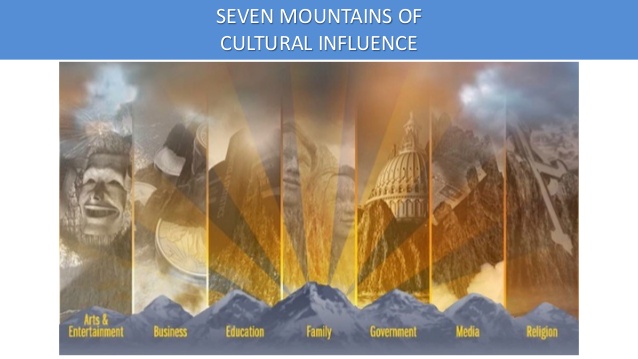 828 Ministries has greatly focused on the heresy known as NAR dominionism because this appears to be one of the last idols of the church age. It is infecting the vast majority of American churches with varying degrees of heretical involvement. Some churches merely dabble in dominionism while others are fully sold out. I know of one church that has the American flag painted on their roof for example. At the heart of all degrees of dominionism however are the same errors. It is the worship of this country, this world, instead of God. Sure, there are plenty of Christianisms thrown around for the appearance of piety but in the end, when you strip away the sound bites, all you are left with is idolatry. Whether it is idolizing politics, legislative desires, or some inaccurate understanding of freedom, all you are left with is rank heresy.

Joseph Mattera is a full-fledged Kool-Aid drinker when it comes to dominionism. He is all in. He comes from the true NAR side of dominionism in that he believes in the apostolic paradigm originally presented by C Peter Wagner over two decades ago. He is also fairly well-versed so it can be challenging to sift through what is so egregiously wrong to get to the heart of the gospel, which is the only thing that matters. Mattera takes issue with the church but only from the perspective that they are not doing enough to further the NAR dreams he has. While his arguments often sound convincing we must dig deeper with the likes of Joseph Mattera to see where he goes off the rails so wildly. So, let us reason once more through the article linked above.

"The kingdom of God is the rule of God that emanates from His throne. God's kingdom encompasses all universes, including every sphere of life on earth. Those stuck in typical church structures only understand the kingdom as it relates to going to heaven. The following points are contrasts based on the implications of understanding that the earth is the Lord's and the fullness thereof and that His kingdom rules over all, not just the church (Ps. 24; 103:19)." - Joseph Mattera

Right away we see how smooth Mattera can be. Of course, it is true that everything belongs to God. That is not quite the point here though. Mattera has a different vision for the church. An extra-biblical vision. He sees those that follow the church structures as laid out in scripture to be "stuck" and only relating to the kingdom is it pertains to heaven. What he does not realize of course is that was the focus Jesus gave us when He ministered. The gospel message is one of reconciliation as it pertains to everlasting life. The true dominionist however is never focused on everlasting life because they idolize this life. Let us now walk through his seven differences between church and his own version of dominionism.

"1. The kingdom encompasses all of life. Most contemporary churches depend upon a "church" building as their sacred space. In the kingdom, Christ followers are called to fill everyone else's building and their concomitant spheres of influence (Eph. 4:10). Unlike the perspective of many contemporary churches, they are not merely called to create and inhabit church buildings for religious use on Sundays." - Joseph Mattera

The church as designed by God is actually for the edification of the saints. It is not an emergency room for the lost or any other trite expression. It is certainly not designed to infiltrate cultural spheres as Mattera outlines here. That heresy is known as the seven mountains heresy and believes that the church must conquer the world to facilitate the second coming of Christ. Despite Mattera's deepest desires, Jesus Himself answered these questions in the key verse today. His kingdom is NOT of this world. There is no saving or sparing this world the coming wrath. All there is, is the gospel and how many might be saved out from this world before the end comes. I assume his scripture reference here was supposed to be Ephesians 4:11, not 10. Verse 11 details the people God established to help the church including apostles, prophets, teachers and shepherds. The surrounding context however also debunks Mattera:

And he gave the apostles, the prophets, the evangelists, the shepherds and teachers, to equip the saints for the work of ministry, for building up the body of Christ, until we all attain to the unity of the faith and of the knowledge of the Son of God, to mature manhood, to the measure of the stature of the fullness of Christ, so that we may no longer be children, tossed to and fro by the waves and carried about by every wind of doctrine, by human cunning, by craftiness in deceitful schemes. Rather, speaking the truth in love, we are to grow up in every way into him who is the head, into Christ, from whom the whole body, joined and held together by every joint with which it is equipped, when each part is working properly, makes the body grow so that it builds itself up in love. - Ephesians 4:11-16 (ESV)

These roles are for building up the church, not the world. It is so that we might attain the unity of faith and knowledge of Christ; to mature. For Mattera's purposes? Absolutely not. It is so that we might be more mature to properly discern false doctrines that could shipwreck our faith. I agree that the church itself is much more than a building but the body of Christ is called to mature in Christ, not carry out the Crusades upon an unbelieving world.

"2. The kingdom releases all saints as ministers. Most contemporary church systems separate clergy and laity. In the New Testament we see that believers are called to function as a royal priesthood and a kingdom of priests (1 Pet. 2:8-9; Rev. 1:6). Hence, all Christians are priests called to be set apart for God's purposes as ministers. Contemporary church systems recognize only a small percentage of their ecclesial body as clergy (priests). Hence, they disempower the rest of their congregation regarding their sacred calling and relegate them to being spectators and pew sitters." - Joseph Mattera

Yeah, no Joseph. The Ephesians verses he cited dispel any such nonsense about everyone being released as ministers. Note that Ephesians teaches us that the roles of pastor, teacher etc are for the edification of the body of Christ, indicating these are specialized positions. Right now, too many people in the church fancy themselves preachers but are clearly without a calling. Mattera takes verses from Peter and Revelation that say one thing and he takes it to absurd levels. Peter does refer to us as a chosen nation and a royal priesthood but Mattera needs to keep reading:

Beloved, I urge you as sojourners and exiles to abstain from the passions of the flesh, which wage war against your soul. - 1Peter 2:11 (ESV)

Right after these declarations, Peter exhorts believes as being sojourners and exiles! We have no place in this earth. It is not our home. Yes, we share the gospel so others might come into the glorious light but this world is passing away and Joseph Mattera needs to let go. The reason why there is a separation between laity and clergy is that is how God laid it out in the bible! Not everyone has the same gifts! Sheep who come to church every week to be led and fed are not "pew sitters." This rush to get everyone out as ministers is an integral part of the purpose driven church scheme and it is just as wrong here as the day Rick Warren wrote it. Jesus used the shepherd/sheep analogy for a reason.