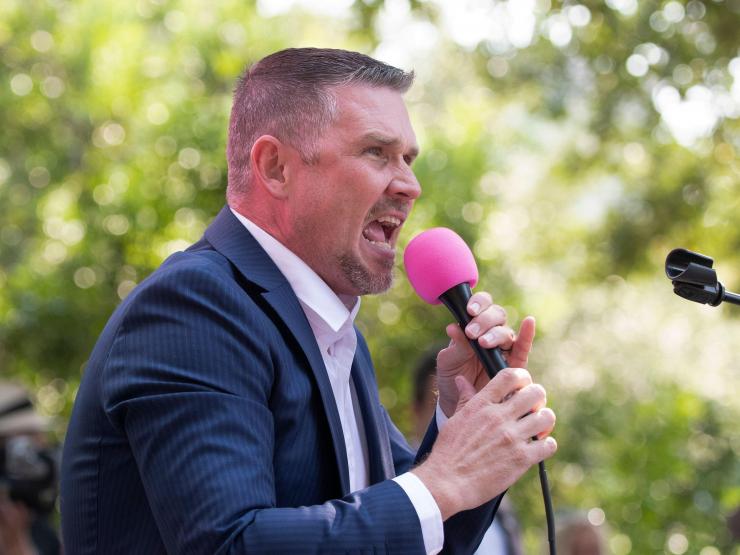 And he entered the synagogue and for three months spoke boldly, reasoning and persuading them about the kingdom of God. But when some became stubborn and continued in unbelief, speaking evil of the Way before the congregation, he withdrew from them and took the disciples with him, reasoning daily in the hall of Tyrannus. This continued for two years, so that all the residents of Asia heard the word of the Lord, both Jews and Greeks. - Acts 19:8-10 (ESV)

What would you do with a man who openly and angrily lies without care? What would you do when his lies cause people to not protect themselves from a global pandemic? When his conspiracy theories are so absurd that they often are downright dangerous to those not tethered so securely to this planet? What would you do if he was also pretending to be a preacher, runs his own church, and wraps his filth up in the name of Christ? What then if he claims to regularly chats with demons who reveal to him the names of "witches" in his church? What if he claims Bill Gates and George Soros secretly plotted to "steal" the 2020 election? What if he claims COVID was a hoax? What if he claims the insurrection that killed police officers was a hoax? What if he made these claims from the pulpit? What if he organized church book burnings, you know like Nazi Germany? Oh, and he has been arrested six times and divorced his wife of 21 years to marry his secretary. Say hello to "pastor", Greg Locke. Let us reason again through the above linked Charisma News article regarding his recent disqualification. From YouTube that is. The church itself does not have the spine or grasp of theology to disqualify him from preaching. So sad when YouTube has higher standards than the church.

"Fiery preaching has been around for a long time. The apostle Paul was known for his hard-charging stance that got him and Barnabas into a bitter disagreement over whether or not John Mark would accompany them on their mission's trip. This butting of heads led to the separation of good friends on the mission field. Over time, Paul's attitude toward Mark changed as he extolled the usefulness of Mark in the mission's field in 2 Timothy 4:11. Similar comparisons can be made for Pastor Greg Locke. He's been called radical, controversial and extreme in his emotionally-fueled sermons." - Charisma News

Let's be clear. Preaching heaven and hell as a consequence for sin is fiery preaching. Claiming people who do not vote as he does are all reprobate and hell bound beyond redemption is stupidity and false theology. The Apostle Paul never instructed his followers politically. He never called Mark a "witch" and demanded that he leave the church. The comparison here is quite ridiculous. Greg Locke is not even remotely like the Apostle Paul. Locke falsely prophesied that "Biden would never be president." Apostle Paul was never so absurdly reckless about what God has and has not said. This normalization of crazy is a large part of the problem the apostate church faces each day. Mario Murillo is not normal. Charisma News is not orthodox. Greg Locke is not a pastor. He is not a shepherd. He is radical. He is extreme. He is a political operative though pretending to speak for God but there is nothing but hate and false teaching escaping his lips.

'He has dueled with Christian and secular leaders alike, frequently due to his stance on COVID policies, along with brutal assertations that the 2020 election was stolen and Biden is a false-president. "He stole the election. I believe that until the day I die. I don't give two flips and a wooden nickel what anybody thinks about it. I don't care what you say about me. He's a liar, and a robber and a thief and a crook."' - Charisma News

Except he is not and Greg Locke now is engaging in false witness. Let me be clear. You have the right in this country to believe whatever crazy things you like. If you think that one political party is filled with baby-eating pedophiles and the other is pure and righteous as the driven snow; you can believe that. It does not mean however that you have the right to spew your garbage and think it is "protected." Please, if you do not understand basic civics, do not think of responding. As a former teacher of American History and Governance, I can tell you unequivocally that our rights are not absolute. The government has the right and in fact duty to restrict rights. One can believe their cause is just but that does not give them the right to beat their flagpoles into spears and assault the police at the US Capital. Realize that according to his own words here, Locke actually believes that Joe Biden convinced over 60 judges presiding over the fraud lawsuits, all local Republican election officials and everyone in between to cheat for him. That is some special kind of delusion.

'It was through Locke's unfiltered declarations that he eventually ran afoul of Big Tech's ever-fluid notions of "community guidelines." With a warning to Christians that they need to "wake up," Locke announced that YouTube had not suspended or deactivated his channel, they had deleted it completely. Locke shared the email he received from YouTube regarding the Global Vision Bible Church YouTube page. It stated that "We have reviewed your content and found severe or repeated violations of our Community Guidelines. Because of this, we have removed your channel from YouTube." Not suspended. Not de-monetized. Removed. Posting the message from YouTube to his Facebook page Locke also wrote, "Ridiculous!! YouTube just permanently deleted our church channel and wiped out many year's worth of sermons. People better start waking up. Absolutely sickening."' - Charisma News

Once again, we are left to explain some basics that escape Mr. Locke. YouTube is a private entity and therefore can decide who they wish to allow on their platform and who they do not wish to be in bed with. Community Guidelines are provided so people know how to BEHAVE. It is clear that Locke has never behaved so the platform finally kicked him off. As for the assertion here that they permanently deleted all of their sermons, I find it difficult to believe that he stored the only copies of his sermons on YouTube. Now, I understand why Locke is so confused since his existence within the church has been without guidelines. He is allowed to say the most offensive and inaccurate things without so much as a correction, let alone a deletion. This is what accountability looks like Greg.

"Christians, conservatives and any other group that finds itself in the crosshairs of the left's control of Big Tech and Big Media should take note of this punishment, even if they disagree with Locke's fiery sermons. There are many reasons Locke has been labeled radical and controversial in the past, but he is correct in stating Christians need to wake up to the censorship that is heading their way. And in many cases, is already here." - Charisma News

Please. If you do not understand what a word means, do not attempt to use it. Locke could have expressed how much he disagrees with the current president. He could have pontificated how he feels the Democratic Party does not represent Christian values. He cannot lie. Repeatedly. He cannot disparage people. Repeatedly. He cannot violate the Community Guidelines. Repeatedly. Charisma just confirms their utter nuttiness by defending this as an example of censorship when it clearly is not. When a college refuses to allow a fringe conspiracy theorist to speak, they are not "censoring." The sadly ironic thing is people who defend this nonsense are quick to point out that it only happens to what the deem as "conservative" voices without being able to see that it is only those voices that are bat-poop crazy. So yes, it is already here but why is it only the secular forces that see the truth and what damage is done to the cause of Christ?

"To the leaders of the legacy media, who label anyone that stands against them fascists while actually furthering the pillars of fascism themselves, there is no difference between Greg Locke and Franklin Graham. They view them both in the same light: they speak out against the left and call themselves Christian. While Locke can take his sermons to the very extreme and let his emotions get the better of him at times, Franklin Graham has a much calmer demeanor yet still speaks out against transgender ideology, LGBTQ messaging and abortion. These positions are viewed as attacks against the left's "message." Their strategy of appropriating compassion, love and truth involves shutting down the outlets from which these symbols of Christianity originate. To silence the truth of Jesus Christ is their goal, where it comes from does not matter, nor if the person is a hot-head who calls politicians "demon possessed" or a world-renowned evangelist whose family has been used by God to save millions worldwide." - Charisma News

Let's try to break this down once more for the impaired. You choose to play in their playground. Their playground comes with rules. When you flagrantly break those rules there are consequences. You can either create your own playground or do what you are told. From a theology and church perspective, Franklin Graham is the same as Greg Locke in that they are both false. They are both rabid dominionists. Graham "earns" over a million dollars per year for operating his two charitable organizations. He is smarter than Locke in that he knows how to dance around the edges of the community guidelines. Both are playing a part. This has nothing to do with shutting the gospel down because neither Graham nor Locke preach the gospel of Jesus Christ.